Posted by CREEK NEWS WEEKLY Posted on 9:47 PM with No comments 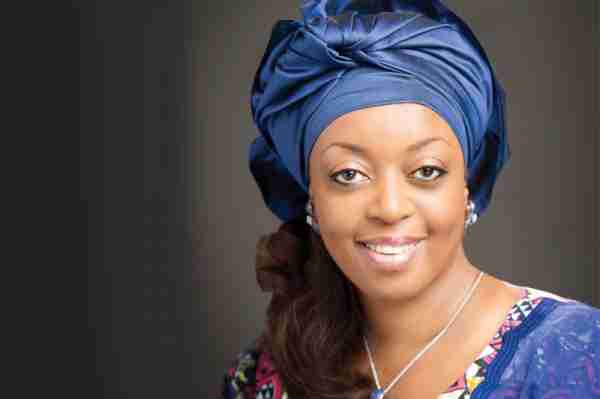 Many would have preferred her on the hush.

But this mummy is too feisty to keep mum.

She was not oil minister here, or a commissioner that fled to the Caribbean. She opted to play moral teacher, a sort of secular priest preaching to the young. She wanted them not to err, not to be corrupt, to focus on the heroic and virtuous life. She did not want them to ape the ways of the yahoo boys. It was cheery not just to see the beauty back to her elegant ways, but alive and well. In her low-cut and with lucid words out of her piquant tongue, we felt assured cancer was behind her. No more the shaved head and lean face. Some of her puff of spirit and frutescent cheeks were back. She may have lost her meridian glow, but her charms retain much of her lustre.

Even for those who saw the cancer tale as a sort of Canterbury tale, no one should begrudge her right to health and cure.

But who would not want to hear from Diezani Alison-Madueke, a former oil minister who turned into something bigger, or shall we say scarier, than oil. The one who did not bore us when she was minister. Her first act was tears. On Ore road, as works minister, she was like one of us, weeping in public over the crater-infested highway. We did not expect her to translate tears into cheers for fixing the road. We just saw her as a naïve former oil staff too pampered to know the task ahead of her.

What many did not understand was how those who invited her thought she was the right person to play nun only a few years after she was spun out of office.

She was, in a sense, canonising her time in office. She was anointing her generation. She was making herself a heroine of governance. Some, especially in the social media, thought her tongue was unfair to its host. She was unfair to her host, a group of Ijaw youths. She just came off an administration inundated with corruption charges. She, too, has a case to answer amounting to billions of dollars. Once Buhari accompanied some former governors to the US under Obama, her name was associated with billions of opaque transfers. We know of the other stories, like the upstarts of ONSA. Some of the persons in the regime have been in and out of detention, and investigations are afire.

She is not here to answer. She is preaching. That is why her reference to yahoo boys seemed out of place.  Hence, someone called her Hushmummy. It was a parody of a fellow from another generation, Hushpuppi, now wallowing in an American cell.

Both Diezani and Hushpuppi dramatise two generations. Hushpuppi’s is showy, Diezani’s cocky. But both are not ashamed to advertise themselves. They periscope two failed generations, coming after that of Soyinka’s wasted generation.

They tell the tales of three generations that have found warmth in the sty. Her generation, which is also mine, started with a lot of zest. We began in the student union days. I recall when we made bonfire on the streets, broke down the Bastille of false democrats, eyeballed the army into fear and trembling, digested revolutionary literature, slurped Marx, recited Engel, quoted Castro.

At Ife, we could not wait to save the nation, to salvage progress from the plunder in progress. I saw the generation, mine, born in the 1960’s, who had the last set of good education, descend into the corruption of their fathers. Whether as fathers and mothers, they gave the wrong lessons. They encourage their children to either leave the country with stolen funds to attend schools. They bring them back to cradle positions over their Nigerian mates who schooled here. Or when they could not afford them to go abroad, they presided over miracle centres. As CEOs, they ran big firms into the sewer. As bureaucrats, they perpetuated bastions of corruption and kafka’s slog. They have built few landmarks and tarnished many.

So, the children saw their parents lie, steal and plunder. They defy the rule of law, jail the innocent, kill the just, torpedo the federalist ethos, become ethnic titans, and enshrine the ethic of an oligarchy.  The generation also gave us militancy and justified it. They created the environment to hate the other, as we have seen in the flourishing of herdsmen. Of course, Boko Haram.

It is the same generation that is giving us the topsy-turvy of the NDDC, where billions of our money is flowing into private pockets though  clinics are absent and fishes die in rivers. The result: the yahoo boys. I thought of the Nobel Prize-winning novel, Lord of the Flies by William Golding. I saw it as a Nigerian story where a group of young people deserted on an island become cheats, turncoats, intriguers and murderers. A lush environment becomes an elaborate jungle of barbarism. We ruined a boon given us on a platter.

I blend the generation of those born in the 1960s with those in the 1950’s. If Soyinka’s generation gave us a war. The following generation denied us democracy. The Yahoo boys’ generation cemented a graveyard of bad values. Soyinka’s generation stole 10 percent of contracts, and Nzeogwu was outraged to foment a coup. Today, the contracts, just like EFCC testifies and NDDC, too, are not even done. Then they ask for variation and start over again and again.

That is why we have moved from a nation where the Naira was shoulder-to-shoulder with the British Pound to over 500. This is the sort of nation Soyinka predicted in his best play, A Dance of the Forest.

Maybe the generation of the Ikorodu Bois will yet save this nation. We are seeing that the offspring of the yahoo boys may be rejecting their parents’ values. A parricide of values, an Oedipal rescue. They seem to follow a radical pattern of salvation through industry and creative experimentation.

We have seen quite a few in that generation. We have two of them, Anthony Madu and Olamide Olawale in an unusual field of ballet, who were mocked by their friends but have worn international recognition. They belong to a low-budget school owned by Daniel Ajala. The joy leaps without standard  arena captured millions across the world. One Emmanuela Mayaki is teaching afterschool coding in the UK. More of such stories are emerging.

Maybe rather than the dystopic nightmare of Golding’s Lord of the Flies that fictionalised the world of Hitler, Musolini and the despair that followed, maybe we should follow a true story captured by Rutger Bregman about a crop of young people in 1960’s lost in an island near Tonga with a pledge never to hurt each other. They did over a year until help came. Maybe they will save  a nation adrift.