Posted by CREEK NEWS WEEKLY Posted on 4:51 AM with No comments 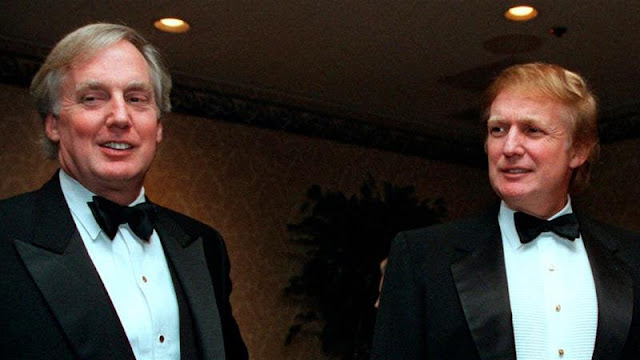 “It is with heavy heart I share that my wonderful brother, Robert, peacefully passed away tonight,” President Trump said in the statement.

“He was not just my brother, he was my best friend. He will be greatly missed, but we will meet again,” Trump said.

“His memory will live on in my heart forever. Robert, I love you. Rest in peace.”

Robert Trump had been undergoing treatment for an undisclosed illness at New York-Presbyterian/Weill Cornell Medical Center in Manhattan in recent days. President Trump visited him there on Friday afternoon.

The president described his brother in “The Art of the Deal.”

“Robert, who is two years younger than I am, is soft-spoken and easygoing, but he’s very talented and effective,” Trump wrote.

“I think it must be hard to have me for a brother, but he’s never said anything about it and we’re very close. He is definitely the only guy in my life whom I ever call ‘honey.'

“Robert gets along with almost everyone, which is great for me, since I sometimes have to be the bad guy."

The younger Trump, a graduate of Boston University, began his career on Wall Street working in corporate finance. He later joined the family business and was a top Trump Organization executive.

Inside the Trump Organization, he was known as “the nice Trump,” Gwenda Blair, a Trump family biographer, told The Associated Press.

His divorce from Blaine Trump in 2008 drew gossip-page headlines. But Robert Trump rarely drew attention from the news media — sometimes newspapers described him as “media averse.”

In recent months, Robert Trump made the news by leading the Trump family’s unsuccessful legal fight to bar the publication of a tell-all book, “Too Much and Never Enough,” by his niece Mary Trump.

In recent years, he was enjoying his retirement in the Hudson Valley.

He’s survived by his wife, Ann Marie Pallan, who he married in March. His surviving siblings include his brother President Trump; his sister Maryanne Trump Barry, a retired federal judge; and another sister, Elizabeth Trump Grau. His eldest brother, Fred Trump Jr., died in 1981.