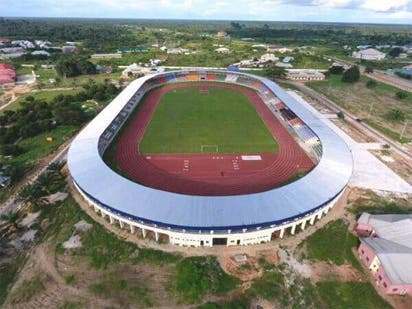 It was a colourful atmosphere at the ground-breaking ceremony for the construction of a FIFA Mini- Stadium in Delta State on Tuesday, with 5 communities in the riverine area of State set to benefit from the citing of the project in Ugborodo, a small community of over 500 years in Delta State.

According to the Deputy Governor, the citing of the project in Ugborodo is strategic and historical and will go a long way to foster unity among the Itsekiri, Ilaje, and Ijaw people and it will also aid the development of the area in all facets. He promised that the government will be an integral part of the project and thanked FIFA and the NFF for the project.

The Deputy Governor, Kingsley Otuaro subsequently led in the performing of the ground-breaking ceremony rites even as the General Secretary handed over the certificate of the project to MoniMichelle Construction Company to signal the commencement of the project. The project is expected to be completed within six months